Looking for a party and some culture? Then Cebu’s famous Sinulog Festival is the place for you. I just got back from the most budgeted and amazing overnight trip to Cebu, Philippines. This festival happens usually on the 3rd week of January every year. So if you’re looking for some fun, sun and a party then here’s the time and place for you! 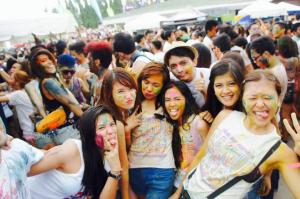 My friend and I booked our flight 4 months early and we were able to get good tickets. Book as early as you can and make sure to bring paint as well! Unlike what we did which was an overnight super hyped up trip. Come earlier and leave a day or two later as it is hard to get around the city with the number of people who are there in the city. It is as if the whole Manila was transported to Cebu to Party. Make sure to check out their schedules online before going to Cebu so that you would know when and where to be.  Also be prepared to do a lot of walking as most roads are closed most especially on the festival day!

We stayed at Golden Valley hotel. It’s a good location as it is near the highway and the airport. So that if you are to go to the airport during the height of the festivities such as what happened to my friend and I then you would have lesser problems. They also had a very good and accommodating staff. They went out of their way to get us schedules of different events and also taxis and other services for no charge. Also if you are looking for any good drivers around the city then I would personally recommend that you contact Manong Douglas Bantilan (If you guys are ever in Cebu contact him for Island Hopping, City Tours, Driving, Hourly pick up and drop off. Cell no. 09174944902)

THANK YOU SO MUCH for getting us to the airport even with all the craziness going on in Cebu! He made the impossible possible! We felt hopeless because 4 hours before our flight we were still trying to get to our hotel from the party. THE CROWD WAS WILD and with the number of people going around we thought that we wouldn’t make our flight. But thanks to Manong Douglas and his connections we got there on time

Its perfect for anyone who wants some love and culture. I love CEBU CITY and its people and I loved Sinulog! It definitely got me out of my usual comfort zone and into one of the funnest and happiest places on earth. THE BEST DAMN 24 hours of my LIFE! ❤